Doncaster Pathfinder and Adventurers were treated to a 2-hour safety symposium on the afternoon of Sabbath 28th May 2022. It was part of their curriculum work for the Adventurer awards of first aid helper and fire safety, and the basic first aid Pathfinder honour.

The symposium comprised an hour of fire safety talk by Lynn Wallis from South Yorkshire Fire and Rescue Service (SYFR) and a first aid talk by Ali Richardson from Yorkshire Ambulance Service (YAS). The presentations, which allowed the pathfinders and adventurers to fulfil their curriculum requirements, were extended to include the whole church. Both presenters – community officers in their respective organisations – were asked ahead of time to cover some of the answers for the two awards and the honour.

The first talk was on fire safety. In a live demonstration, Lynn bought faulty electrical equipment that had been the cause of fires in people's homes, ranging from electric kettles, toasters and multi-plug extension sockets. Her talk covered the common causes of fire, smoke alarms, what to do if your clothes catch on fire and how to contact emergency services in the case of a fire outbreak. Lynn encouraged the children to memorise their home telephone number and street address, as these are the details required by the emergency services when reporting a fire at home. Some key messages were ensuring that the smoke alarms are tested weekly by an adult at home and practising the stop, drop and roll technique used if clothes catch fire. They were also taught not to run because running causes fires to burn faster.

Oxygen, heat, and fuel are frequently referred to as the "fire triangle." The oxygen in the fire triangle sustains combustion. So, at its most basic, fire safety is based upon the principle of keeping fuel and ignition sources separate by tackling one of the elements of the fire triangle. 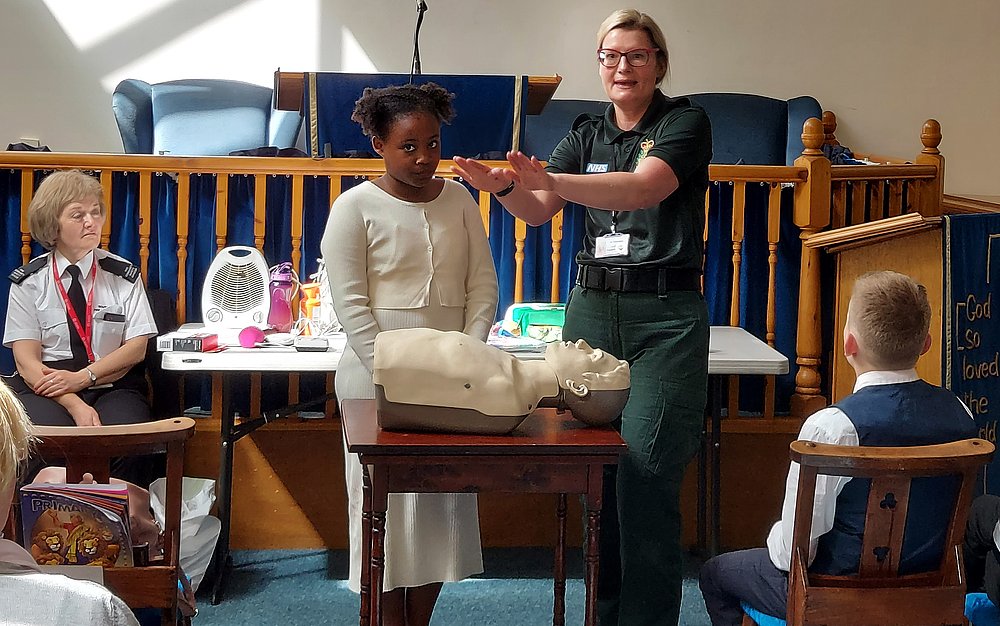 The second talk was from Ali, who usually delivers her presentations to schools in the Yorkshire region. Ali brought with her a manikin to demonstrate the cardiopulmonary resuscitation (CPR) technique. Her talk on first aid emphasised the acronym DR ABC, which stands for danger, response, airway, breathing and circulation. In any emergency, it is essential to identify any hazards before approaching the victim. Once a threat has been excluded, the second step is to assess the victim for any response – this can be as simple as shouting, "hello, are you ok?". If no response, you check the airway, assess for breathing and then check the circulation by feeling for a pulse. The CPR technique was demonstrated on the manikin. Ali reiterated that ultimately, the best help for someone who suffers a cardiac arrest is a defibrillator, which delivers a shock to the heart. There are public defibrillators available in the community which aim to provide this help. You can check your nearest defibrillator in the UK here.

It is important to note that in the history of first aid in the UK, St. John Ambulance was the first to use it in 1879. The seminal lectures on first aid were given by Professor Esmarch, who gave five ambulance lectures in 1882, which were subsequently translated from German into English by Princess Christian – the daughter of Queen Victoria. These lectures were published under the title "First Aid to the Injured" by Smith Elder and his partners. In 1882, St. Andrew established the First Aid Organisation in Scotland to treat the injured in peace and wartime. In 1908, there was a merger between St. John's and St. Andrew's organisations to undertake their activities under one roof. Now first aid is part of the emergency medical services in the UK – regulated by the Resuscitation Council UK – and is taught at work, school or, in our case, in the Adventurer and Pathfinder programmes, as part of life-saving skills.