Three pastors and an elder from the North England Conference (NEC) travelled to Ukraine to support the humanitarian work as women and children flee the war-torn country. Writing about the trip is Pastor Joe Philpott, one of the four individuals who drove across two time zones to respond to the emergency situation and help those who have been affected by the war. 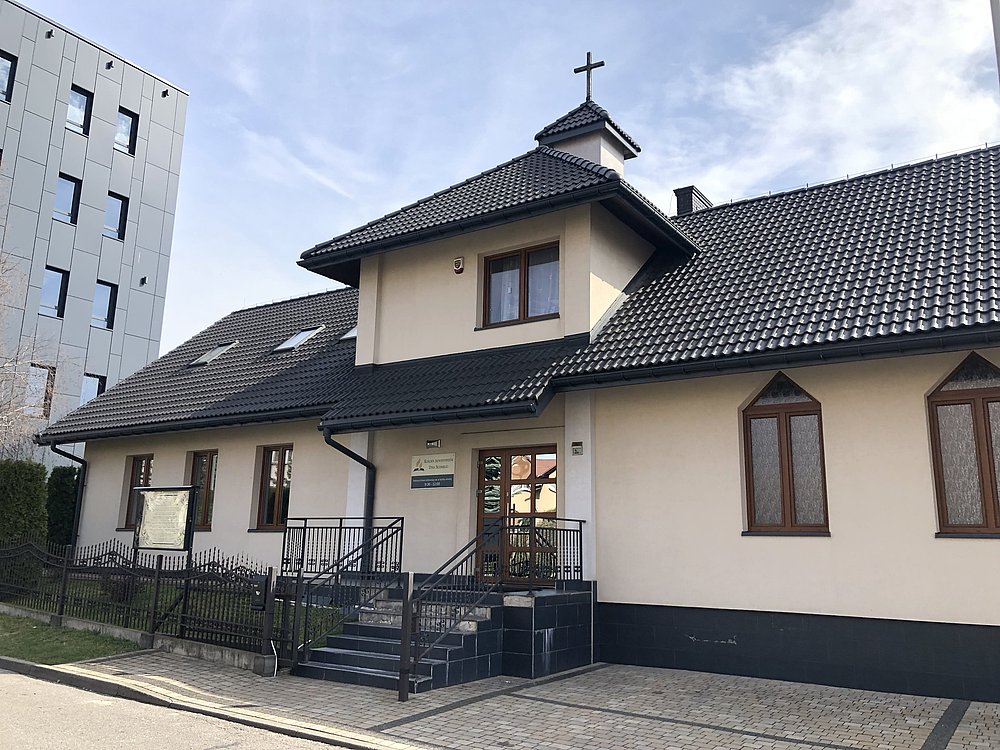 Snippets from my diary

We departed the UK on the afternoon of Sunday 3rd April 2022, and after 31 hours of almost non-stop driving, and very little rest, we finally arrived at an Adventist-owned haulage company where we collected two minibuses loaded with food, baby products and other supplies. After another couple of hours of driving, we arrived at Rzeszów Seventh-day Adventist Church, the base where we would stay for the next three days. We arrived just after midnight where we were greeted by Pastor Marek Micyk, the Union Youth Director for the Seventh-day Adventist Church in Poland. After getting settled in our new surroundings, we bunkered down in the sanctuary with the other Adventist volunteers under the watchful eye of the Lord, as did Samuel. 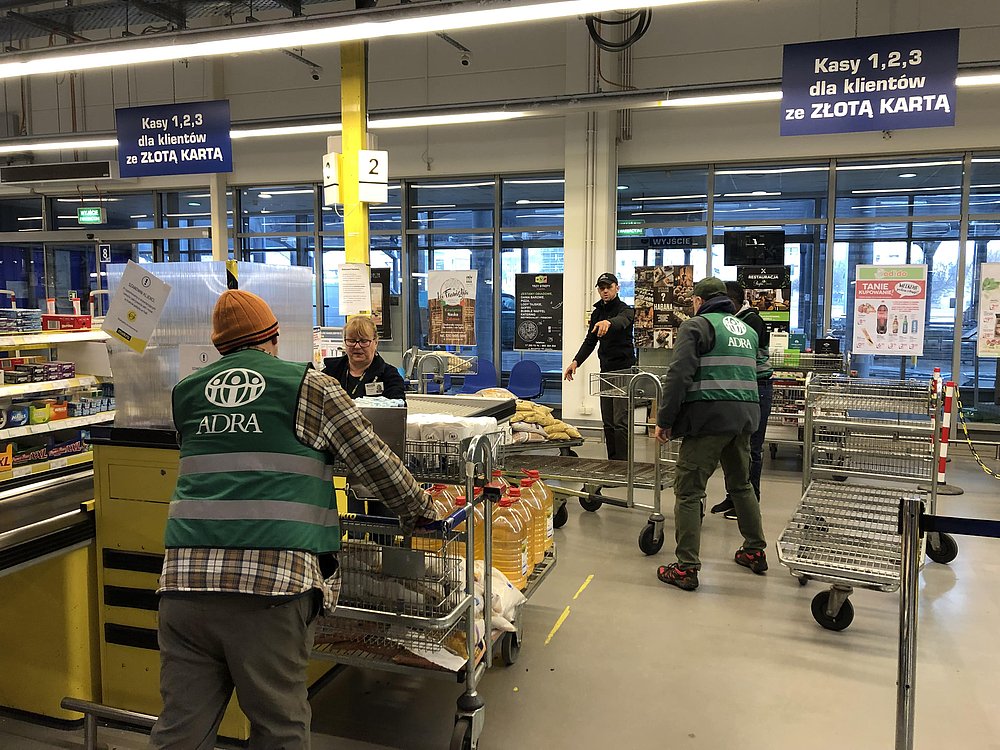 Ministry began early on Tuesday 5th April with a 7am team meeting, followed by a trip to Macro to purchase food and other supplies. We then travelled to Lviv, a city in western Ukraine, with three minibuses and a people carrier loaded with the essential items. We arrived at Lviv Seventh-day Adventist Church, one of the four hubs organised by the West Ukrainian Conference, which was established during the war to provide accommodation and food for refugees as a stop-gap before being relocated to one of several European countries once they cross over to Poland. With the help of some of the refugees residing at the Church, we offloaded the goods as Adventist members processed and prepared them to be delivered further into the country. The Church is also home to Hope Channel (Ukraine), a primary school and the Conference’s headquarters.

As we chatted and mingled with the Ukrainians, the sirens suddenly went off to pre-warn us of possible missile strikes. Thankfully, nothing happened on either of the occasions the sirens were alarmed.

With the minibus now empty, we then travelled to Lviv train station to meet with the coach and locate refugees who wanted to travel to Poland. Whilst speaking with several refugees, many planned to travel to different cities in Poland and other European countries as they seek safety and security. Still, there are limited travel opportunities, and often people have to wait days and even weeks to cross the border. Despite the limitations, we managed to board 72 refugees onto our vehicles within a couple of hours. One woman was travelling with a 2-month old baby, and another came from a town just north of Kyiv, the City that the Russians had captured. Listening to their stories was difficult; we can only imagine what it was like to have gone through their experience. 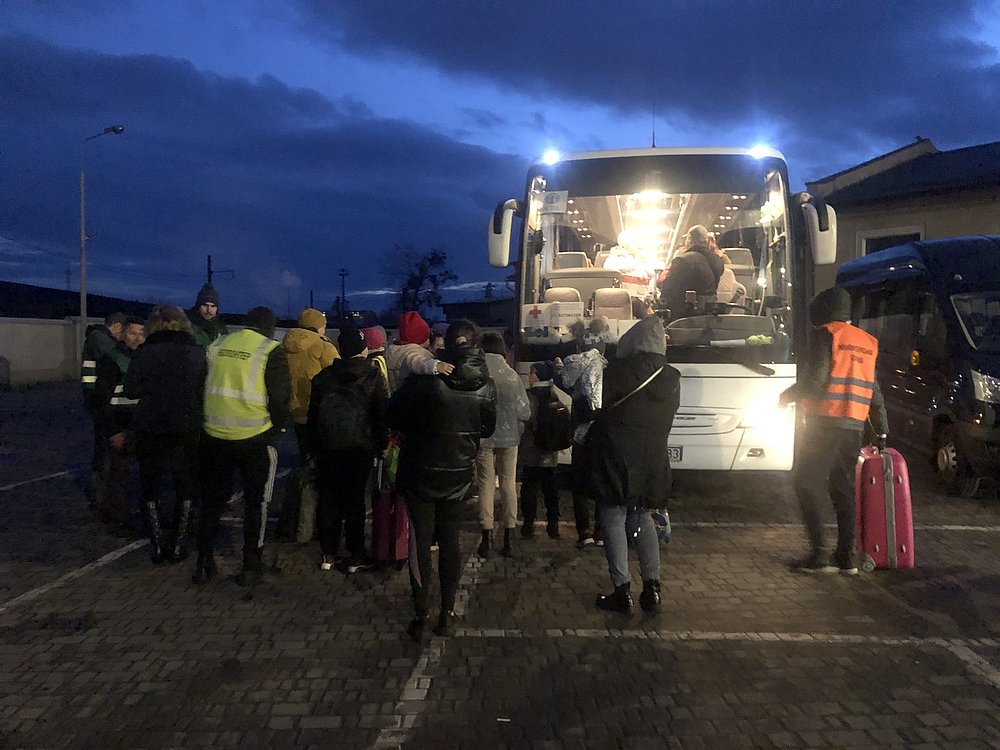 Once we crossed over to Poland, we first stopped at a refugee centre about 5 minutes from the border. We arrived at about 10pm, and immediately started to process several refugees who wanted to remain there. Whilst we were there, a coach with Swedish delegates arrived to transport people to their country. This practice is common with coaches continually arriving to take individuals to different cities across the continent. The refugee centre seemed to be very operational, offering a selection of buffet food available 24 hours a day with safe sleeping conditions under the control of the Polish army. When leaving Poland, we headed to the Rzeszów train station, which houses another refugee centre, and provides railway transport to specific locations. Our remaining passengers stayed there before we headed back to the Church we were staying at around 2:30am, where we crashed and went straight to sleep from exhaustion. 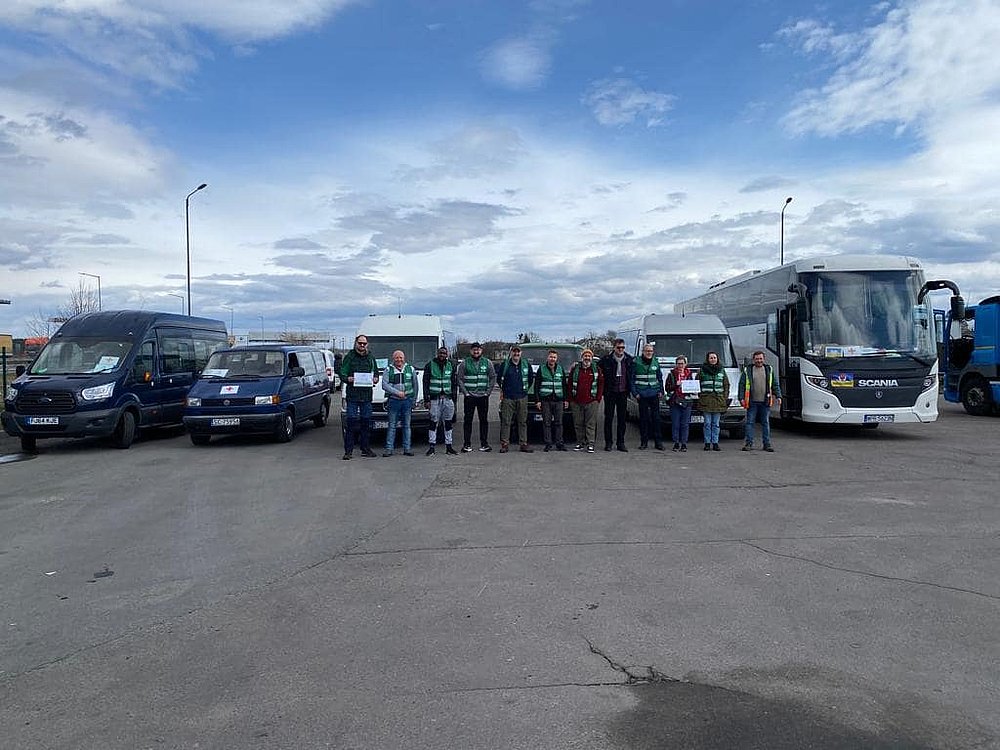 The second day began with another early start, and the day’s activities almost mirrored the first. It started with collecting two new minibuses, one of which was purchased through the donations given towards the initiative. Once we reached the Ukrainian border, checks were more thorough than the previous day, both in the morning and evening. Once we received the all clear, we met up with another team, which included three minibuses, two large cars and a coach filled with supplies donated from various sources. Again, we travelled to Lviv Seventh-day Adventist Church where the goods were offloaded and repacked into smaller vehicles ready to be transported to other locations. After a light, typically-Ukrainian lunch, we travelled to Rzeszów train station, whereby 104 refugees boarded our vehicles. Some stayed at the refugee centre across the border, others travelled onto Rzeszów train station and some stayed in the upper room of Rzeszów Seventh-day Adventist Church. 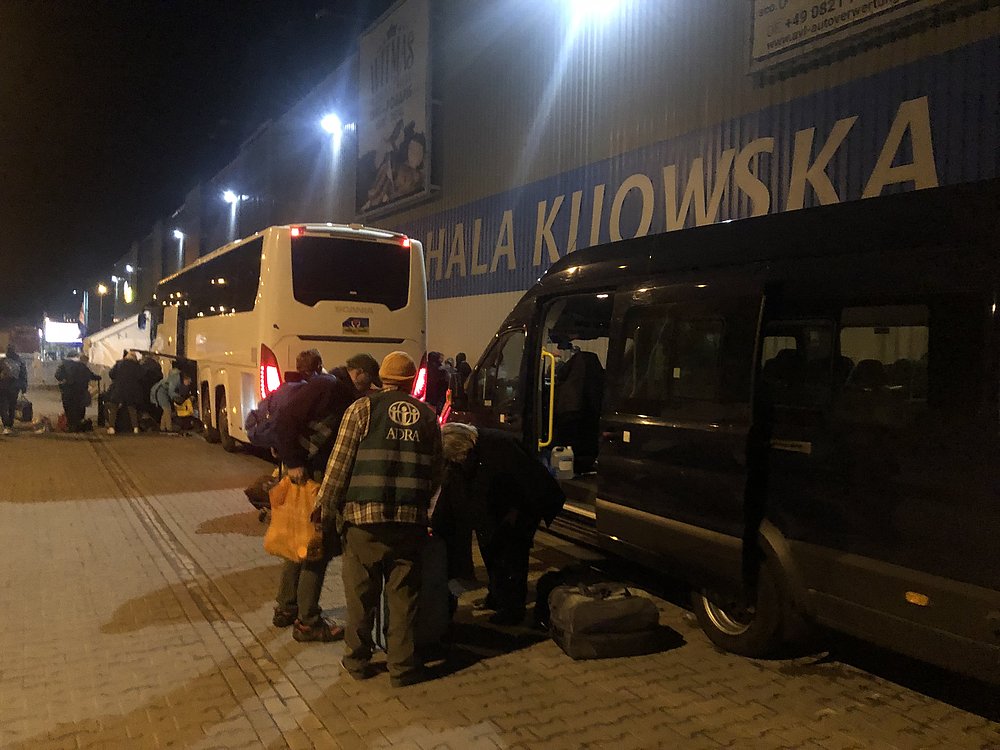 Routinely before we began to transport refugees to their destinations, we would take a moment to introduce ourselves, and explain the purpose of why we were doing what we were doing, and then would offer to pray with them. Many Ukrainian individuals have an Orthodox background and were intrigued to learn more about our denomination. One such individual was a Catholic Priest fleeing Kharkiv. He shared images and videos of what he witnessed in his home city. He was interested to learn more about the Adventist Church. The several-hour trip across the border provided an excellent opportunity for us to share and connect with him.

A remarkable Nigerian young man was a computer science undergraduate student in Kharkiv before the war began. Now hoping to flee Lviv to find safety across the border, he wasn’t able to cross because he’d lost his passport and mobile phone. For several days, he was passed from one person and organisation to another as he sought help to get out of the country. Meeting him, we were able to purchase a new mobile phone for him to make contact with his family back home in Nigeria, and transport him to the Nigerian embassy in Kyiv. Miraculously, a day after we returned home, we got a message from him to say that he arrived safely in Poland and was grateful for the help. Praise God! 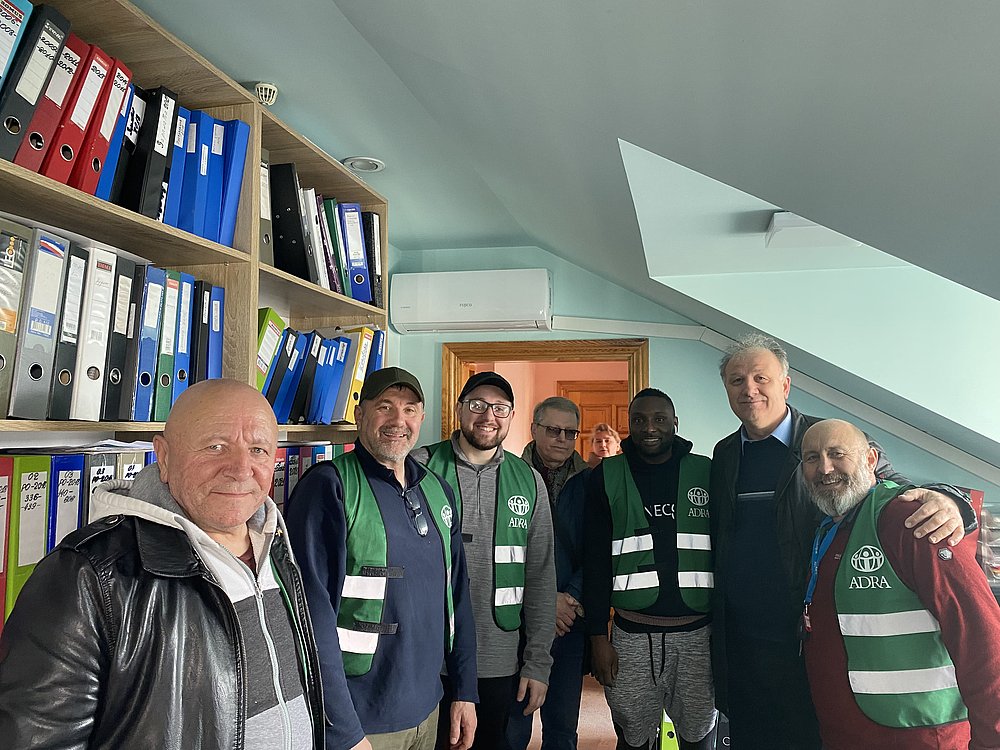 Message from the President of the West Ukrainian Conference

On Wednesday 6th April, we met with Pastor Chopyk Vasil, the President of the West Ukrainian Conference, and some of his colleagues to listen to their experiences and learn more about how we can support them. In his recorded message, he said,

“Dear brothers from England. We are sincerely thankful for your help to the Ukrainian people. We are thankful to everyone who showed mercy and helped our nation. With these funds we will feed people and help them to relocate from towns and cities where fighting is taking place and we will help them to find shelter in our homeland. I pass my sincere greetings to all my brothers in England from West Ukraine Conference. May God generously bless you for your kindness. Be blessed by God.”

The ongoing support we received from concerned individuals in the UK, US, and other places around the world was touching. People were praying, sending their well-wishes and getting behind the cause. Donations of food, blankets, baby supplies, female hygiene products and money flooded in during the nine days that we advertised the initiative.

Your donations contributed to the following:

Plus, an additional 220 litres of fuel was donated from a UK haulage company.

Before leaving the UK, £10,756 was donated by individuals, Churches and businesses. However, on the Wednesday morning during the trip, we asked for further donations, and £11,804 was given within the next 48 hours. We're in talks with those on the ground to identify how best to use the additional funds and support further humanitarian aid projects.

The other individuals on the trip were Pastors Ian Philpott and Alan Hush, and Horace Radcliff with Pastor Adam Ramdin supporting from afar.

Matthew records the words of Jesus as He discussed the coming of the Son of Man in which the sheep and goats will be separated. “And the King will answer and say to them, ‘Assuredly, I say to you, inasmuch as you did it to one of the least of these My brethren, you did it to Me’” (Matthew 25:40). Whilst we’ve returned home and life continues as normal, we’re mindful of the challenges still facing the people of Ukraine and the continual faithfulness of the many volunteers who are acting as the hands and feet of Jesus. As you serve the disadvantaged, the deprived and the persecuted through your giving, your prayers, and words of encouragement, you are serving Jesus. We praise God for the opportunity to minister, and we encourage you to continue to help those in need.