Adventist singer, Tara Goddard, from West Yorkshire, was one of the three talented performerswho made it to the finals of the first BBC One Songs of Praise, Gospel Singer of the Year competition 2021. The programme was hosted by Mark De-Lisser, a renowned choral director and vocal coach who was assisted by three judges – Alexander Burke, David Grant and Heather Small, all music celebrities.

Having got through the preliminary rounds, Tara was one of five singers in the semi-finals which was broadcasted on Songs of Praise on Sunday, 31 January 2021. Her powerful and passionate rendition of the song 'Pass Me Not O Gentle Saviour' won her a place in the finals which was aired the following Sunday, 7 February 2021. As the first of the three finalists to perform, Tara's song choice was 'His Eye Is on The Sparrow'. Tara's comment before she sang was that she wanted to show the judges that this was not just about performing but about ministry and for them to see the God to whom she was singing. 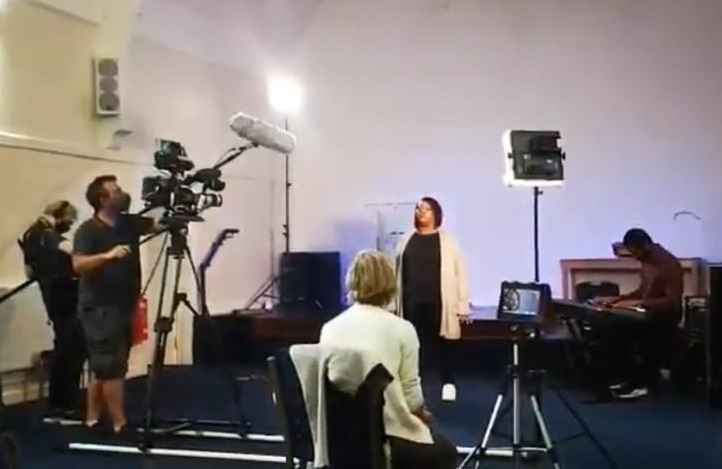 Indeed, the judges in their feedback expressed that her belief in God clearly came through.

When asked why she had selected those two songs, Tara's response was – "I chose 'Pass Me Not O Gentle Saviour' because I do not want the Lord to pass me by.  I want Him to hear my humble cry. He is always with me in bad times and good and I just love the meaning of the words.  I have been through a lot and the Lord has never passed me by."  With regard to 'His Eye Is on The Sparrow', Tara said "I grew up singing this song and as a child believed that if God takes care of the sparrow, what will He do for me. It is also one of the songs I am frequently asked to sing."

Tara started singing at the age of five with her family in Birmingham, Alabama, where she was born and has continued using this gift in service for the Lord over the years. In 2017 she moved to the UK and joined the Fartown Seventh-day Adventist church in Huddersfield with her husband and three children. Not only has she blessed our local congregations with her singing ministry but other churches as well in the North and South of England. She has also been an inspirational singer at the SEC Camp Meeting in 2019, the NEC Pathway of Hope virtual evangelistic campaign held in September 2020 and on the Adventist Radio Christmas programme 2020, to name a few.

When asked about the overall experience, Tara's response was that "being on national TV has been great for me. I believe that God has given me a gift to sing to praise Him and that singing is a ministry He has given me to touch people, old and young, and to tell them how wonderful He is. My goal is, if I just reach one person then I will keep singing as long as God allows me to do so. This is my way of doing the Lord's work, I can do all things through Christ which strengtheneth me."

Tara would like to extend her thanks first and foremost to God, to her husband Pedro Goddard, who strongly encouraged her to enter the competition, and her children; also the Fartown and Huddersfield Seventh-day Adventist churches and the current minister, Pastor Pardon Chenjerai; Pastor Steve McKenzie, BBC Songs of Praise team/BBC One, family, friends and many more.