The last weekend of October 2019 was indeed a weekend of excitement, reunion, fellowship and competition. The 'In Christ Christian International Fellowship' otherwise known as ICCIF, was holding its fourth annual gathering, this time in the West Midlands. This evolving association is a group of Seventh-day Adventist friends, families and former Spicer College classmates who come together annually for worship, praising God through music and at the climax of the weekend in a highly competitive volleyball contest. A good portion of the weekend comprises of reunion, as well as making new friends.

Sabbath 26 October was a full day from start to finish. Most of the group met at the Parish Centre, Bilston, Wolverhampton. Sabbath School presented itself to be lively and engaging with discussions and feature talks. By Divine Service the congregation had increased greatly. The congregation was welcomed to Wolverhampton and to the West Midlands by the area coordinator of Area 6, Dr Patrick Herbert, who also participated in worship by offering the pastoral prayer within the service. The participants of the divine hour hailed from various parts of the country. Two highlights of the service came from Paul Spicer one of the main organisers of the weekend. He reminded us of the ethos of this assembly, which is simply to spread the gospel through the avenue of sport (namely volleyball). At that juncture every individual present, was given 5 'Signs of the Times: How to Pray', pocket tracts, and encouraged to use them to witness to someone who is not a Christian. 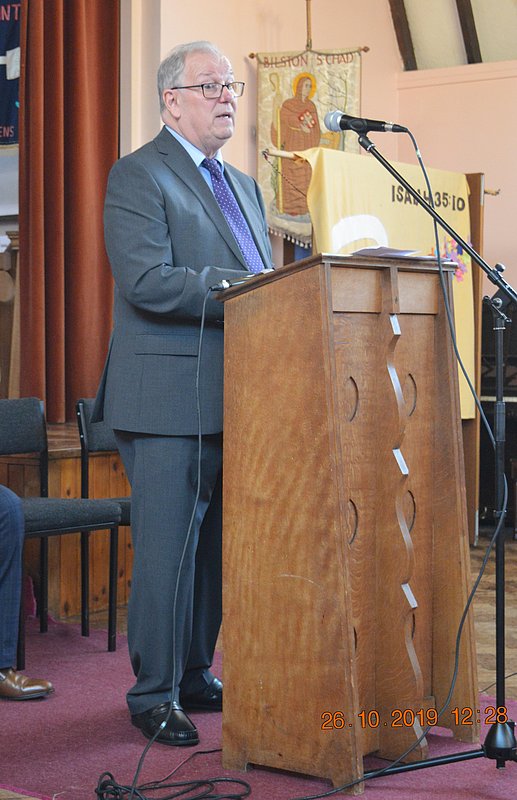 The other highlight of the divine hour was the apt sermon delivered by Elder Richard Newman, where he spoke about what it means to be, 'In Christ Christian'. In the summary of his message he cited an illustration of a man in his dying hours found leaning on a chair, which was symbolic of him leaning on the Lord, whom he had got to know personally through the medium of prayer. The preacher highlighted that 'In Christ Christian' means to be so connected to the Lord in prayer that we lean upon the Lord for His direction.

After the service closed, the chairs were moved back as a photo momentum of all present was taken. This was the precursor that led into a scrumptious lunch prepared under the leadership the CEO of this project, John Edwards. Throughout the weekend all meals were prepared and eaten in a communal fashion.

Sabbath had two more ingredients, a gospel concert and then in the evening a social. Again, the theme depicted was family and fellowship. Family groups sang, soloists rendered, instrumentalists played music and the congregation sang, all of which made a joyful noise unto the Lord.

The social truly brought lots of laughter and interaction with all who came together. All forms of group games and various cultural dances made the evening memorable. All of the day's activities pointed to the 4th international volleyball tournament of ICCIF.

On the Sunday morning 12 teams gathered at The Sir Douglas Ellis Sports Centre, Aston University, Birmingham. The team names demonstrated a national and international meeting: Chelmsford City, France Hornets, Friends Riders, Irish Lions, Manchester Stewards, Newcastle, Redhill Ravens, Team USA, US Hurricanes, Warriors, WSDAC Men, and Yeovil Panthers. It was obvious from the way each team was dressed in their team colours that they meant business and came to do their best to win the trophy.

This tournament commenced with an inauguration message by Elder Richard Newman and a prayer from Pastor Sam Gungaloo.  All team captains gave a 'one minute' speech followed by a medal presentation and then to get in the spirit of competition, last year's winners played a friendly against the team captains. The tournament incorporated league matches where the 12 teams competed against each other. Then the top four played against each other to determine the semi-finals followed by an exhilarating, nerve-wracking final between the USA Hurricanes and Team USA. Team USA came out victorious beating the USA Hurricanes two nil.

Three team competitors commented on the tournament. Princeton from the United States said, "I brought my family from the US. I came to meet all my friends. The fellowship was very well organised, with a lot of people. Even though we have something like this at home it's not with so many people."

When asked how does it feel to win the tournament, he stated, "It feels great to win, but to meet all my friends, some of them are my childhood friends, some I haven't seen in thirty years, it has been a real blessing."

Sonny told me he was from Ireland and played for the Irish Lions. He said, "It has been an amazing weekend, the two days, the Sabbath worship, the social evening, and a whole day of volleyball. God has been good to us, I got to meet with so many friends." 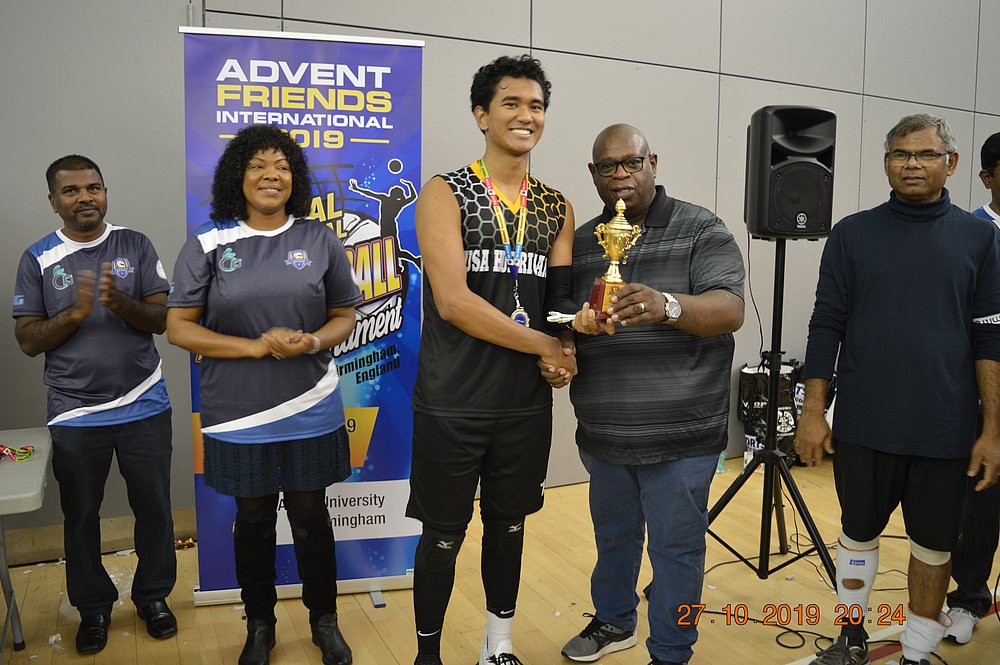 The Tournament (ICCIF) weekend came to a climax where medals and trophies were presented. Assisting in this presentation were special guests Dr. Patrick Herbert and Wife Ann-Marie.The Director of ICCIF Paul Spicer, reflecting on the weekend, said, “By God’s grace we are so happy that people from different continents and countries joined together as Adventists, coming together to revive the spiritual, physical and mental and especially on Sunday we had a great tournament. The Sportsmanship was a joy to see as the players interacted together.” 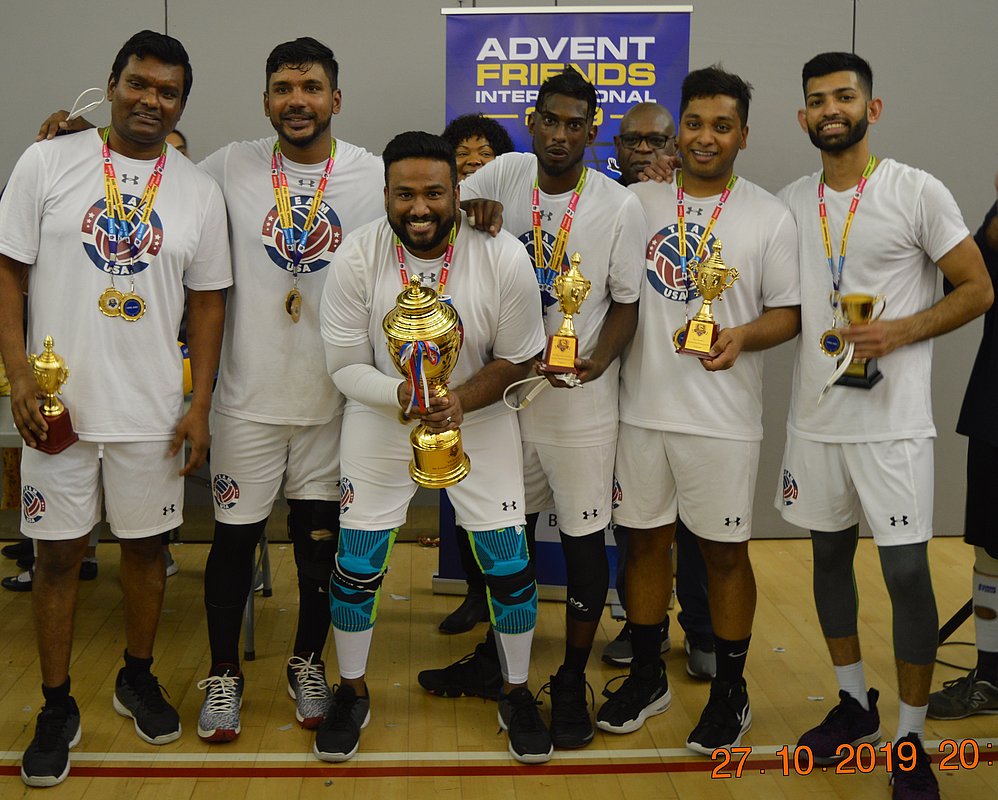 Finally, John Edwards  CEO, was overjoyed with the way the weekend turned out. He remarked, “All servants, no masters, everyone contributes!” He further declared, his gratitude to all who contributed, all who extended sponsorship, and all put in the time to make this event a success. His final word is, “God be Praised!”